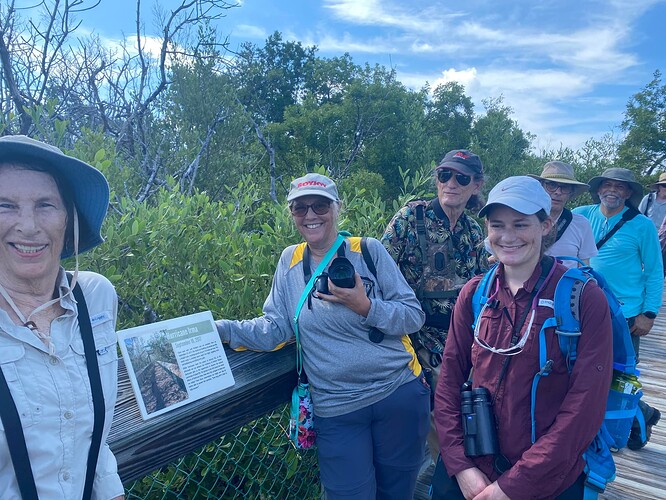 Twenty-nine birders joined me on Saturday, 9/10/22 for the TAS birding trip to the Islamorada area in the Florida Keys. The trip began at sunrise at the Cracker Barrel in Florida City, where our only Cooper’s Hawk of the day flew over the parking lot. A Common Myna was spotted as we were leaving Florida City.

We arrived at Windley Key Fossil Reef Geologic State Park just as a park ranger was arriving to unlock the gate. A few birds were seen around the parking area, including a couple of Eastern Wood-Pewees and a Yellow-throated Warbler. Several Chuck-will’s-widows were flushed along the park’s nature trail; other birds seen during our exploration of the park included White-crowned Pigeon, Magnificent Frigatebird, Great Crested Flycatcher, Yellow-throated and Red-eyed Vireo, Purple Martin, Ovenbird, American Redstart and Prairie Warbler.

Our next stop was Long Key State Park, where we discovered that king tides had flooded much of the park, seriously limiting our options. An interpretive sign along the park’s boardwalk (see photo) reminded us that we were visiting the park on the fifth anniversary of the day that Hurricane Irma made landfall on Long Key, devastating much of the Middle Keys. Among the handful of birds seen during our short visit was a Common Ground-Dove, a flock of Short-billed Dowitchers, a Willet and a Bald Eagle.

We then drove to Curry Hammock State Park, home to the Florida Keys Hawkwatch. Before visiting the hawkwatch deck, located in the park’s campground, we had lunch in the picnic area. While having lunch, a flock of about a dozen Swallow-tailed Kites flew over the picnic area. After lunch, we walked into the campground via the beach, where a nice selection of shorebirds was found, including Semipalmated Plover, Ruddy Turnstone, Least, Semipalmated, Western and Spotted Sandpipers, Short-billed Dowitcher and Willet. Many swallows were swirling overhead, mostly Barn but also including Bank, Cliff and Purple Martin.

Luis Gles and Kevin Christman were manning the hawkwatch deck when we arrived. Luis informed us that he spotted another swallow species while we were having lunch, a Bahama Swallow! This Bahamian endemic has been recorded in the United States only a handful of times, including at Curry Hammock in 2014 and 2020. Luis only saw the bird for a few seconds before it disappeared. It wasn’t seen again. Turkey Vulture, Osprey and Bald Eagle were the only birds of prey recorded during our visit. Other birds seen from the hawkwatch deck included Gray Kingbird and Yellow Warbler.

Before heading back to Miami, we made a quick stop at tidal wetlands on Grassy Key, where we found a single American Avocet among a small flock of Black-necked Stilts. We ended the day with 55 species. A list of species recorded, as well as individual eBird checklists for each stop of the trip, can be found in an eBird trip report. Thanks to Luis Gonzalez for compiling all of the eBird checklists.