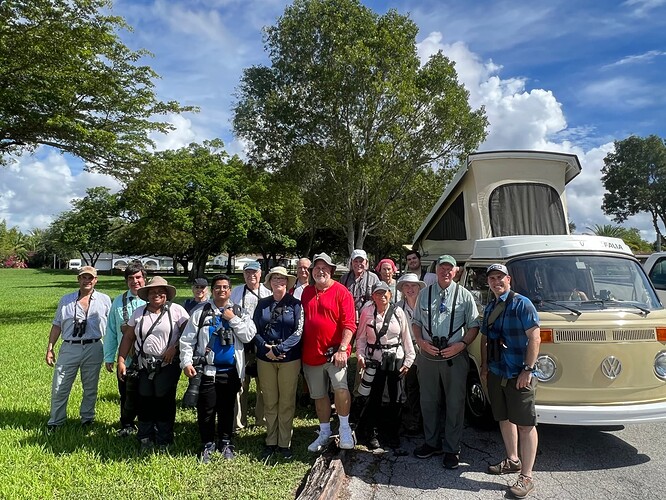 Well within the peak window for fall migration, today’s TAS field trip of September 17, 2022 had 20+ birders join a walk through Kendale Lakes Park in West Kendall. Marc and Eliana Kramer from Birding By Bus led the group across the park’s grassy fields and paved walking paths, scouring the live oaks, stranger figs, black olives, and other trees for migrant birds. Both new and advanced birders attended the walk, from 16 years to 83 years young and from all different backgrounds.

Straight out of the gate, there were a number of Yellow-throated and Prairie Warblers as well as Red-eyed Vireos working feverishly in the tree canopy. A fruiting fig tree with nice ripe red fruit in the park’s southeast corner was a warbler magnet where we spotted Cape May, Black-throated Blue, Tennessee, Black-and-white, and Northern Parula Warblers. Shortly thereafter, a flash of bright orange turned out to be an adult male Baltimore Oriole that really wowed the group with its Halloween colors!

The Hong Kong Orchid Trees in the park are hummingbird favorites when they’re in flower, though at the moment the trees had only a few blooms. Nevertheless, we spotted one small hummingbird, initially thought to be a Ruby-throated Hummingbird, but photos examined after the walk may suggest the possibility of a rare Rufous Hummingbird (ID pending). A Yellow Warbler, also rare for the park, was seen by a few, as was a difficult Empidonax flycatcher that suggested Alder Flycatcher. A calling Eastern Wood-Pewee hid in dense tree foliage, but its diagnostic call was conclusive. Other warblers seen included Worm-eating, Chestnut-sided, Ovenbird, and American Redstart for a total of 12 warbler species for the day.

Around 10am, the weather was heating up and thermal uplifts began to support southbound movement of raptors. One osprey turned into two, two turned into three … and within minutes we had spotted seventeen southbound osprey! Simultaneously, a Cooper’s Hawk was also causing quite a stir amongst the local Blue Jay flock.

At the field trip’s end, despite the intense summer sun, we wanted to up our game and add a few water birds to the list. With a fun and competitive group, we made our way to the lake just south of the park, where we added various herons, egrets, and gallinules — bringing the morning total to 49 species! Everyone of different birding levels and from various walks of life were able to learn, teach, and share in the wonders of bird migration here in West Kendall. Smiles all around, we wrapped the day with a group photo posing with Valentina, the famous VW Bus!