A total of 24 birders joined me (Luis Gonzalez) for a bird walk around Matheson Hammock Park. While waiting for the participants to arrive, a few Orange-winged Parrots were enjoyed on top of the royal palms alongside a pair of Reb-bellied Woodpeckers and a flyover Belted Kingfisher. Once the walk started, we noticed slow bird activity with a slow trickle of migrant songbirds in the forms of Blue-gray Gnatcatcher, Palm and Black-and-white Warbler.

The trees North of the restroom proved to be pretty productive with Northern Parula, Cape May, Black-throated Blue, Prairie and Yellow-throated Warbler being pretty conspicuous along with the first Gray Catbirds of the year, plus a pair of Yellow-throated Vireo and a pair of White-eyed Vireo.

When crossing to the West half of the park, activity in the trail was nonexistent outside of an American Redstart, but once in the open, a pair of Red-tailed Hawks were seen perched and flying, a trio of female/immature Painted Buntings were briefly seen in the grasses alongside Common Yellowthroats and while waiting for a shower to pass, we enjoyed good views and calls from a Brown Thrasher.

Going back through the trail, we hit a small mixed flock with another Yellow-throated Vireo, Northern Parula, American Redstart and a briefly showing (but proudly calling) Ovenbird. Once back in the parking lot, to give a proper send-off, a Pileated Woodpecker that was briefly heard earlier in the day was foraging on top of one of the pines.

A total of 35 species were seen for the walk, click here for a full checklist. 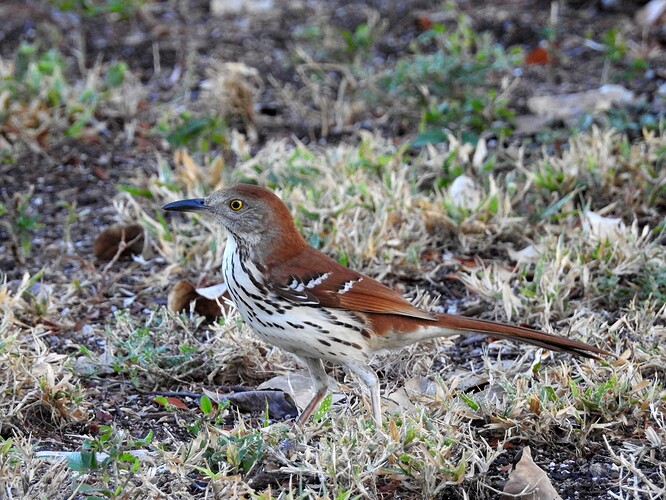