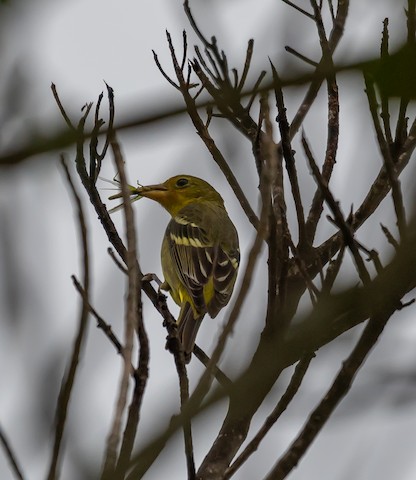 Thirty-four birders joined me on Saturday, November 19 for a full day of birding in Everglades National Park. The trip began at the Coe Visitor Center near the park entrance, but before we began our exploration of the park, we did some birding outside the park at the C-111 Canal, which crosses SR 9336 about 1.5 miles east of the visitor center. Our prime target here was an immature male Vermilion Flycatcher that has been hanging out around the water control structure at this location for the past couple of weeks. We quickly found the Vermilion flitting about at the water control structure, so we next turned our attention to the flock of Scissor-tailed Flycatchers that we could see swarming along the road and over the fields just west of the canal. Among the Scissortails were a half-dozen Western Kingbirds, one Tropical Kingbird, one late Gray Kingbird and most unexpectedly, a Western Tanager! A Brown-crested Flycatcher was calling along the road but was only heard by a few in the group. Other birds seen during this stop included a flock of Sandhill Cranes and a pair of White-tailed Kites.

After re-entering the park, our first stop was on Hidden Lake Road in the Hole-in-the Donut restoration area. We parked along Research Road, then walked south along Hidden Lake Road to flooded restoration areas on both sides of the road. This area produced our second unexpected bird of the day, a pair of American Pipits feeding along the road! Birds seen in or over the flooded fields included Blue-winged Teal, Gadwall, Northern Pintail, a large flock of American Coots, Killdeer, Least Sandpiper, Greater and Lesser Yellowlegs, Wood Stork, Great White Heron, Reddish Egret, Roseate Spoonbill and Northern Harrier. Heard birds included Sora and Pileated Woodpecker. Some in the group saw a Ruby-crowned Kinglet in the tropical hardwood hammock we passed through to reach the flooded fields.

Water levels were high at our next stop, Anhinga Trail, so not much of note was seen there during this stop. A King Rail was heard by some (later in the day, Luis Gonzalez and I saw a King Rail darting across the road between Paurotis Pond and Mahogany Hammock). We moved on to Long Pine Key, where we discovered that a paving project prevented us from parking at the picnic area. We parked along the road outside the picnic area and spent some time searching on foot for birds in the campground before returning to the picnic area for lunch. Birds seen during this stop included Downy Woodpecker, American Kestrel, Great Crested Flycatcher, Brown-headed Nuthatch, Eastern Towhee, and Pine, Yellow-rumped and Yellow-throated Warbler. A Northern Flicker was heard.

Though bird activity was slow at Mahogany Hammock, we managed to find a couple of new warblers for the day: American Redstart and Magnolia Warbler. The big surprise here was a Swainson’s Hawk we spotted circling over the hammock while being harassed by American Crows. West Lake was much more productive, as several ducks were present, including Blue-winged Teal, Northern Shoveler, Gadwall, American Wigeon, Mottled Duck, Ring-necked Duck and Lesser Scaup. A good-sized American Crocodile was patrolling the area. Other birds seen during this stop included Pied-billed Grebe, Royal Tern, Wood Stork, American White Pelican and Sharp-shinned, Red-shouldered and Short-tailed Hawk (dark morph).

Our last stop of the day was in the Flamingo area. A few American White Pelicans were roosting among the wading birds at Eco Pond. A dozen shorebird species were found at the amphitheater area near the campground: American Avocet, Black-bellied and Semipalmated Plover, Ruddy Turnstone, Sanderling, Dunlin, Least, Western and Spotted Sandpiper, Short-billed Dowitcher, Greater Yellowlegs and Willet. Other sightings at this final stop included a Laughing Gull trying to swallow a pufferfish, plus Caspian Tern, Brown Pelican, Yellow-crowned Night-Heron, Osprey, Savannah Sparrow and a West Indian Manatee!

We ended the day with exactly 100 bird species, a rare Century Day! A complete list of all birds tallied during the day can be viewed in my eBird trip report.